Online Kettlebell Technique Course
PURCHASE FOR $199 TRY 7 DAYS FOR FREE
Watch Intro Video
The world of kettlebells is dominated by two training styles called Hardstyle & Kettlebell Sport. Although vastly different in nature, they have been proven to work and give you the most bang for your buck whenever you pick up a kettlebell - if you understand them correctly and are able to differentiate between the two. For beginners, this task might be undestandably confusing. With this online kettlebell master class in +100 (video) lessons, you will embrace the emergence of the Hybrid Style movement where you will learn how to combine the best of both worlds.

Do you want to improve your kettlebell skills?

With a proven and tried coaching system that gives you lasting results?

Unless you’re a seasoned kettlebell professional, understanding and developing proper kettlebell technique completely on your own without hiring a coach is a mission destined to fail.

I and other professionals share the same experience: When people get coaching who prior taught it to themselves, re-programming wrong, bad or even dangerous movement patterns is the first thing we have to take care of.

Not only does this cost additional time, effort and money in the first place.

Unfortunately, many who visit us for the first time - after teaching kettlebells to themselves through watching videos - already suffered some form of injury.

Please believe me when I say – I’m not here to condemn you if this was your experience!

In fact, I want to do the opposite and help you on your way to lasting results – because I know firsthand that getting coaching can sometimes be a humbling experience.

It’s time to shift gears and build your kettlebell skills the proper and correct way, my friend!

We have been fortunate enough to become kettlebell experts with our proven track record of lasting results in our studio as well as online.

You’re looking at thousands of hours, reps and coaching sessions in the trenches in real settings with REAL people – who share the same painful experiences like you are experiencing right now.

Problems such as these listed below:

I know these problems not only because of our experience with our clients.

I know them because I’ve had them myself – and I’ve tackled them one by one thanks to my Sensei Steve Cotter and multiple other experts I’m having conversations with.

All of our clients have overcome their setbacks and problems with a little bit of help from yours truly – and we know that you can do this too!

I Wasn't Always The Kettlebell Expert..

In fact, I remember quite vividly the first time I've picked up the 20 kg kettlebell - and immediately being scared of it!

How am I supposed to be hoisting TWO of those things 40 times in the Jerk and snatching one of them for 100 REPS?! All without putting them down?!

But I'm getting ahead of myself; let me backtrack a little bit..

It All Started In February 2019

I've just settled the deal with Steve Cotter to fly him into my studio for private coaching to get certified.

The master is coming to visit us and there's no turning back now!

As I'm researching the fitness tests for both certificates of Steve Cotter's IKFF, I was approaching the 20 kg kettlebell.

Imagine the shock of my younger Split-Training-Bodybuilding-Type-Me when I found out, that even the 16 kg is giving me a hard time trying to snatch it several times overhead..

Destroying my forearm, chaffing off my palm skin and leaving me in pain..

In my despair, I wrote Steve an email saying that I wasn't sure if I was going to make it..

As I was getting better with my training and technique, Angie & I finally managed to pull of the CKT1 test.

Yet, the BIG ONE was still in front of me.

And I'm still scared wether I'm able to pull it off..

I went in second because Angie passed her test before me.

Time to face the truth!

Everything was going according to plan..

Until the 36th rep where I briefly lost balance and Steve shouted "no count".

Steve's input with "fast legs" and Angie's motivating screams gave me the second wind to reach the 40th rep.

I inflicted these "war scars" on myself during the 100 snatches with the 20kg kettlebell.

Thanks to the adrenaline, I didn't feel it until after the set was done..

PS: The jerk test still haunts me today in my nightmares.. 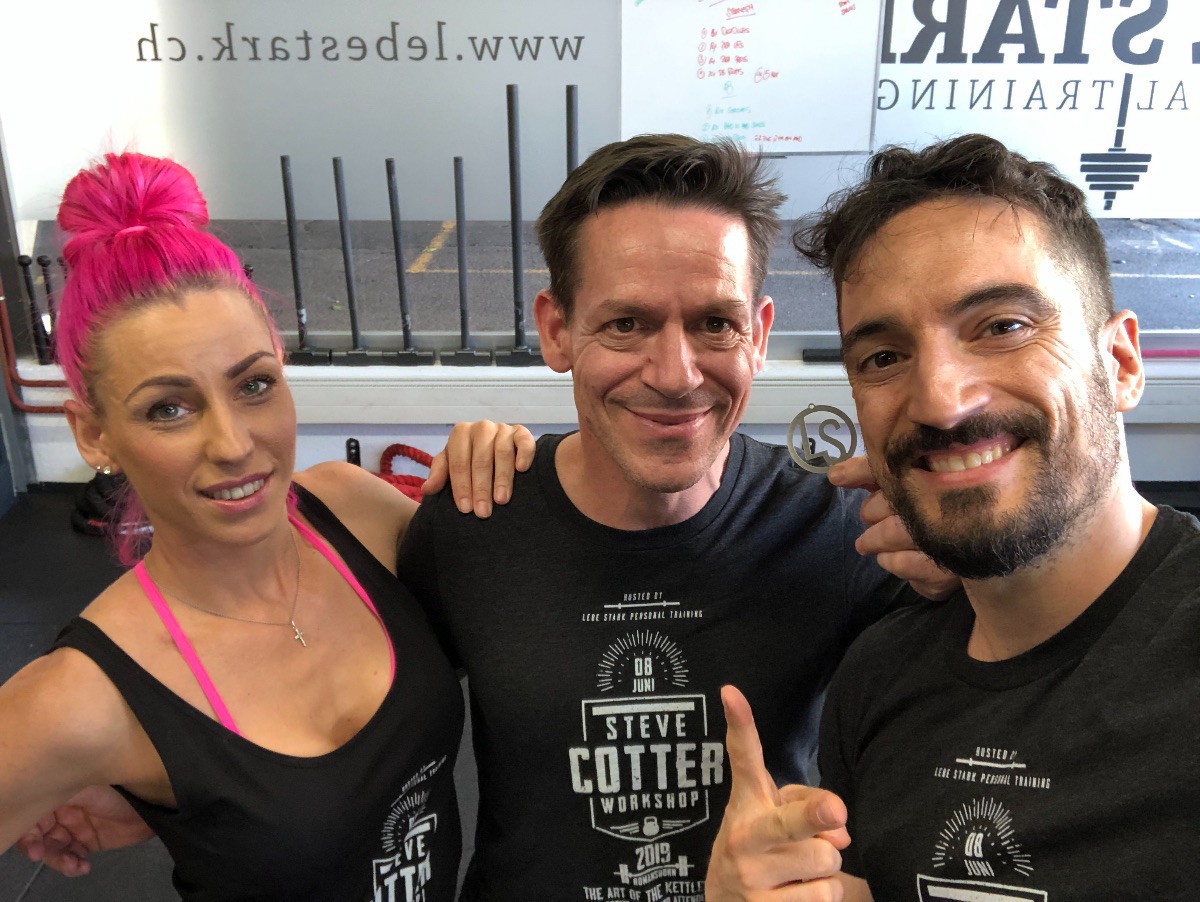 Today we're reaching millions of views on our YouTube channel.

We're teaching hundreds of clients on a daily basis.

We've invested 1000s of reps and hundreds of workouts to master the art of kettlebell training.

I'm able to talk to legendary coaches, athletes and trainers who were vital in the modern kettlebell revolution in the early 2000s.

Whenever I pick up a kettlebell today, we both melt together into a single unit.

The 20 kg is now one of my working weights - and I respectfully consider it on the "lighter" side of things.

The lessons it took me to reach this epiphany moment is EXACTLY what I want to teach you in this master class - in typical, detailed and passionate swiss-fashion!

If I was able to master this ancient, bell shaped object from Russia..

And many of our clients did as well..

Then I'm convinced that YOU can too! 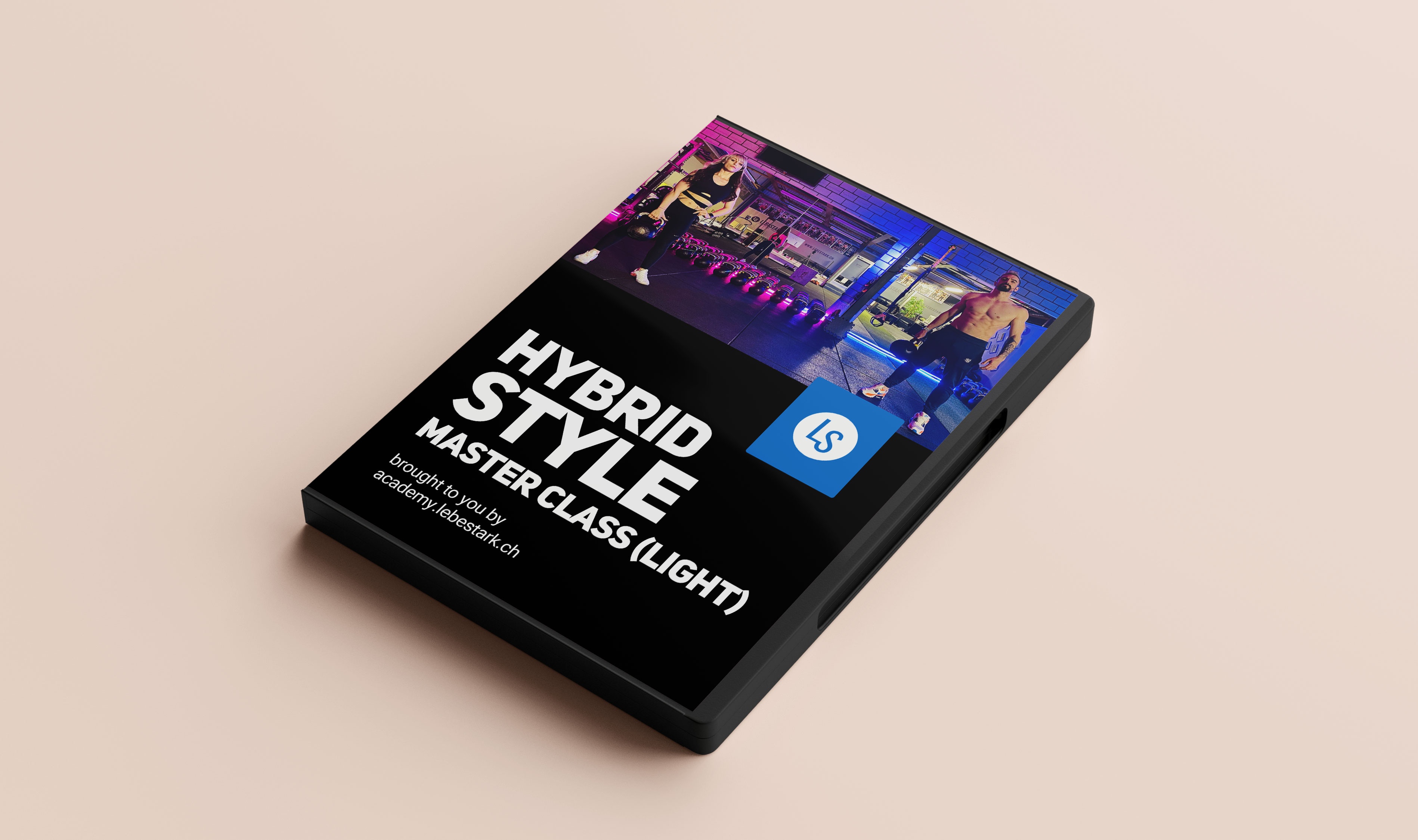 The "School Of Physical Culture" is a monthly live coaching session via Zoom that is offered to everybody who purchased one of our courses - free of charge! The lesson will consist out of technique classes, workouts, and support meetings to help you transform the way you move with the kettlebell.

Meeting time is usually on Thursdays and varies between 5 and 7 PM CEST. The sign up link will automatically translate into your time zone. 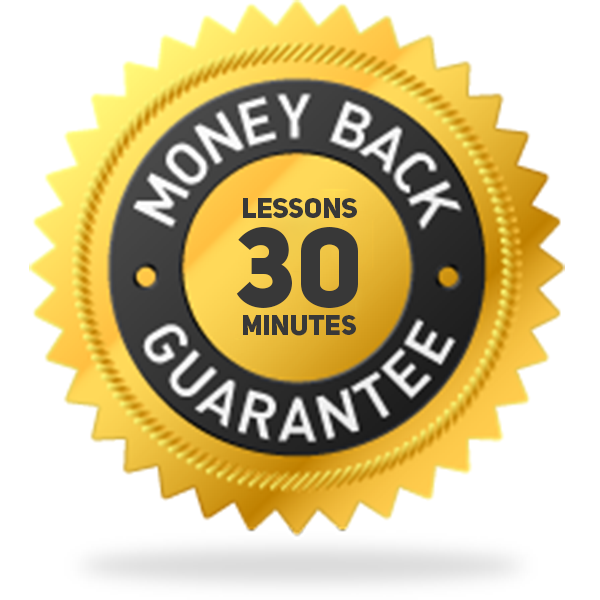 At Lebe Stark Academy, we want you to make an informed, risk-free decision. If, for any reason, you're not 100% satisfied with your purchase after 30 minutes OR 30 completed lessons, just drop us an email. We'll refund every cent of your money - no questions asked. You can even keep the LS notebook, the T-Shirt and 30 Days Of Kettlebells as a parting gift.

“I've completed the German version of the Hybrid Style Master Class and I was blown away by Gregory's careful attention to detail. I am now preparing for my first Kettlebell Sport championship. ”

“I have lost over 30 pounds thanks to Lebe Stark and my transformation has been built for lengevity. Kettlebells are my tool of choice in my busy day as a self-employed hairdresser. It gives me the biggest bang for my buck for the time invested. ”

“In June I weighed 260lbs (118kg) and one year later I hit 172.5lbs (78.5kg) - a loss of 40kg or 87.5lbs. I appreciate Lebe Stark because of the balanced approach and Gregory constantly talking to experts who are in agreement. The biggest thing for me to learn is the need to rest and recover and how important it is.”

“Gregory does an excellent podcast and I find him encouraging and insightful. ”

“Gregory is a man with a vision and I'm delighted to see the student become the master. ”

“I've watched some of Gregory's videos and I like this technique!”

I‘m not asking you to say Yes or No today.

I just want you to make a fully informed decision and that's something you do on the inside -  not on the outside.

So you go on the inside and find out wether the Hybrid Style Master Class is valuable to you.

If it is, that‘s when you decide to keep it because you are 100% committed!

If it‘s not for you - no hard feelings!

I want you to be fully informed - so go ahead and check out this 7-Day free trial where you can find out what this Master Class has to offer.

Heck, who buys a house without first looking into it?

Just know that for whatever reason -  after 30 minutes or after 30 completed lessons you ain‘t happy, I ain‘t happy!

Just say so and you will get your money back and keep the bonus you've already received as a parting gift.

I only want to keep your money if you‘re happy with what we delivered to you.

So on a final note, consider these two scenarios:

You finally understand how to approach the kettlebell with a perfected, tested and tried technique. You're getting the most out of each one and every workout and you're crushing it!

You're not satisfied after 30 minutes (cold feet!) or after 30 completed lesson (bah, Gregory's teaching skill is pure garbage!) - at least you're walking away with a little bit of something you've learned, our beautiful LS-notebook, a cool T-Shirt and a workout course as a parting gift.

Both options are risk-free.

The only thing GUARANTEED not to help you at all is closing this page, walking away and settling for status quo..